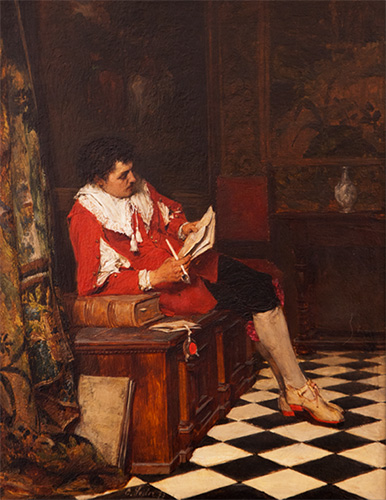 The Signilar Painting Logo is done by Carl Wilhelm Anton SEILER (1846-1921). The painting — part of the Signilar Collection — is signed “C. Seiler ’77” in the lower left center. He was born at Wiesbaden, and he studied art at Berlin and Munich. He lived in Berlin, where he taught at the Academy in 1894-95, and in Munich. Many famous American painters were students of the Munich School in the 19th Century.

Signilar Art Video was established in 1989 by portrait artist Teresa D. Spinner, to provide high quality instructional videos of today’s master artists, and to capture these same artists for future generations. Over the more than 20 years Signilar has been in business, more than 25,000 emerging artist have benefited from watching these videos. Signilar Art Video is dedicated to continuing to provide the same high quality, instructional productions for some time to come, as a low cost, and personal, alternative to classroom instruction.

Teresa Spinner, a native of New Haven, Connecticut, began her art career in her later teens studying with community artists at the Whitney School of Art. She later studied sculpture and painting at Bennington College, Vermont. She continued her studies with such artists as Ken Davies at the Paier School of Art in New Haven, and also with the faculty at Yale University such as Deane Keller and Pulitzer Prize winner Rudolph Zallinger. Ms. Spinner then continued her studies beyond school with such instructors as Burton Silverman, Bruno Lucchesi, David Leffel, Lajos Markos and Nelson Shanks. She attended the National Academy of Art, the Art Student’s League in New York City and the Pennsylvania Academy of the Fine Arts in Philadelphia, to name just a few. Over the years she has received several awards including the top Landscape Prize in 1989 from Pennsylvania Academy of the Fine Arts in Philadelphia.

Teresa established her artistic reputation during her travels around the United States and Europe with her husband. Her first solo exhibition was in the late 1970’s in Texas and in Puerto Rico. Later exhibitions of her work took place in North Carolina, Louisiana, and in Pennsylvania. In Philadelphia she opened a studio-gallery, where many of her former teachers gave workshop classes. Under the aegis of Ms. Spinner, these same workshops also became part of the Young Artist Series at the Galleria San Juan in Puerto Rico. Her pencil sketches attracted the greatest praise until she established herself in oils primarily Romantic Realism. The landscapes in oil, delicate sketches, and classical portraits have assured Teresa a firm place in many collections. Ms. Spinner’s work hangs in both public and private collections throughout the United States, in Latin America and in Europe.