Jacob Collins is a leading figure in the contemporary revival of classical painting. He earned a BA in history from Columbia College, attended the New York Studio School, the New York Academy of Art, and the Art Students League.

As a student, Collins also copied extensively in museums in America and Europe. His work has been widely exhibited in North America and Europe and is included in several American museums. Collins is the founder of the Water Street Atelier, The Grand Central Academy of Art, and the Hudson River Fellowship.

A Note from Signilar’s President….

I want to expand a little more about the DVD on Jacob Collins. This is definitely about measuring and checking the proportions of the figure.  Jacob is drawing a frontal nude, a healthy, young gal who has both strong legs and a nice figure.

The lesson that is so apparent on this DVD is how often and how carefully he measures as he goes. He has many secrets to his process of measuring. It is obvious that this is exactly how he manages to create such beautiful, lifelike figures in his paintings. He is so careful laying out the drawing of the figure and the shadow areas, the musculature and skeleton underneath, that he doesn’t have to think about it later. It is right! So, unlike many others of us who get to the middle of the painting and find that our figure is off or the layout is askew, Jacob is constantly taking the measure of the parts and the whole. When he is finished, as he says, the drawing is ready to be finished or to be transferred to canvas for a painting. What was fascinating was how many different ways he measured and then how he stroked each line to indicate muscle and bone underneath.

I believe what  Mr. Collins has given us in this DVD is a great deal of what he teaches at his Grand Central Academy. As he mentions, he does not have his students start with the mechanics of the body but rather measuring and carefully laying down each mark. That was also interesting to watch. Jacob seems to literally sculpt out the figure with his mechanical pencil. I found my time with him to be utterly fascinating. And, the great thing is that we have managed to capture everything he says, every piece of advice and lesson on this DVD. So, that you not only watch him create this lovely nude but you can hear it all even his humming at times.

I sincerely hope you will watch this DVD many times and get as much out of your time with Jacob Collins as I did. 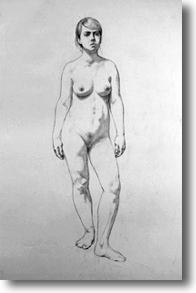