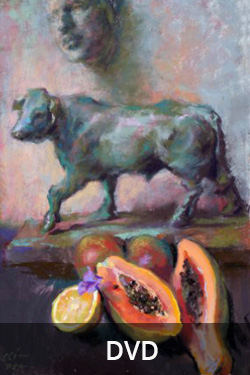 In this program, Judy demonstrates how to set up, explore and bring to life a wonderful still life. It has a sculpted, clay head against a wall, a bronze bull and some very ripe fruit. All these contrasting shapes and textures are clearly described. Judy “pushes the color”, as she tells us about what to put in, what to leave out and the skill necessary to “make the painting sing.” 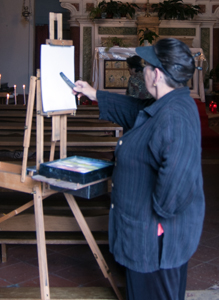 This DVD demonstrates how to setup, explore and master a brilliant still life. Judith talks about what to put in and what to leave out, and how to make things look 3 dimensional. Judith demonstrates her passion and knowledge of color as she talks about “pushing the color.” We, as artists, have the chance to find the drama and to make something wonderful out of everyday things.

“This is an “alla prima” (i.e. completed in one sitting) pastel still life.

“Setting:  I had never been to Puerto Rico before, and was stunned by the spectacular weather and the colors and light.  It was during the “rainy season” so there was rain of some sort – at times a brief downpour and at other times a soft gentle mist – every day.  On this particular day, it wasn’t obvious that it would be safe to paint entirely under open sky, but I wanted natural light on the subject, so this was set up adjacent to an open patio but under a partial overhang.

“Inspiration:  We were staying in Old San Juan at an historic inn which is also the studio of a sculptor, and I had become enchanted by both the sculptured head (which now hangs in my home!), which was by our hostess, and by the wonderful bronze bull by a friend of hers.  The soft green patina on the bull, the related but quieter patina on the head, and the warm and cool colors on the stucco wall all struck me as beautifully harmonious;  and the fabulous fruits of Puerto Rico bowled me over.  I wanted to paint them all!  I wanted to have them!

“When I decide to do a painting, I want to have fun and to challenge myself.  I don’t want just to turn out a potboiler;  if I’m going to be bored, anybody viewing the painting will be bored, too, and we all would be better off doing something else.  So, in this case what were the fun and challenge?  First, I already was in love with the objects and the subtle natural but wet light.  Second:  how might they relate to each other?  How might they contrast to one another?  Relationships and contrasts create an interesting dialogue in a painting.  Third:  what might be unexpected?  Was there a joke to enjoy?

“Composition:  Still life is more often than not painted in a horizontal format, so I thought it would 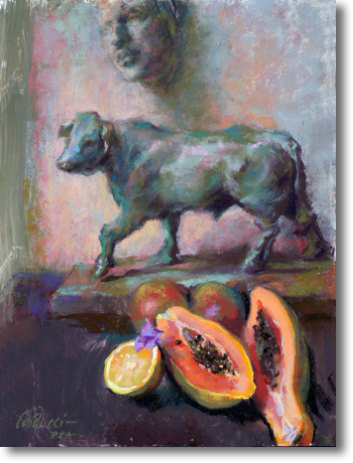 be fun and different to do this one in a vertical space.  That also allowed for hanging the head on the wall and relating it to the bull by means of the soft shadow.  (The shadows become progressively darker as they go down in the space, becoming almost black under the fruit.  The sharpening of contrasts of both color and values in the foreground, in contrast to the middle ground and the background, created some depth in what was a very shallow space.  Although this is a “still” life, I wanted movement:  the fruit rises out of the bottom edge, the bull walks out of the side but hasn’t quite left the space, and the sculpted head floats out of the space at the top.  The two halves of the papaya overlap at angles that create tension, and the orange half leans in at almost a “tangent” or “kiss” – which still life painters are often cautioned to avoid… but I like to play with breaking rules!  And that is the point at which the little violet flower appears, setting off the most extreme contrast between the yellow orange and the bright purple complementary colors.  The eye is lead into the painting via the longer papaya, up the leg and haunch of the bull, thence via the shadow to the head;  the tilt of the head takes the eye down the face of the bull, to its poised hoof, to the center of interest at the junction of the orange flower and jewel-like seeds.

“Color:  There is a play of warm and cool colors throughout which serves to pull the work together.  The palette is surprisingly limited which makes it harmonious.  Complementary red-oranges and blue-greens give contrast, and the one yellow-violet note gives it punch.

“Texture:  The various textures give variety:  the tiny shiny black bronze seeds have sparkle.  The flower is soft and gentle despite its bright color.  The orange is shiny, fruit is smooth;  the sculptures and wall have varied degrees of roughness.  Varied strokes of the pastel are used, from wet wash in the foreground, tiny dots in the seeds, sharp short strokes for the shine on the orange pulp, sharp edges to the fruit, scambled broken areas for the wall, layering of glazes, hard and broken edges.

“And at last – it will mean what it means to the individual viewer.  Some will see the joke.  I had great fun painting it.”